FREE SHIPPING ON ALL ORDERS SHIPPED IN THE CONTINENTAL U.S. $50+ 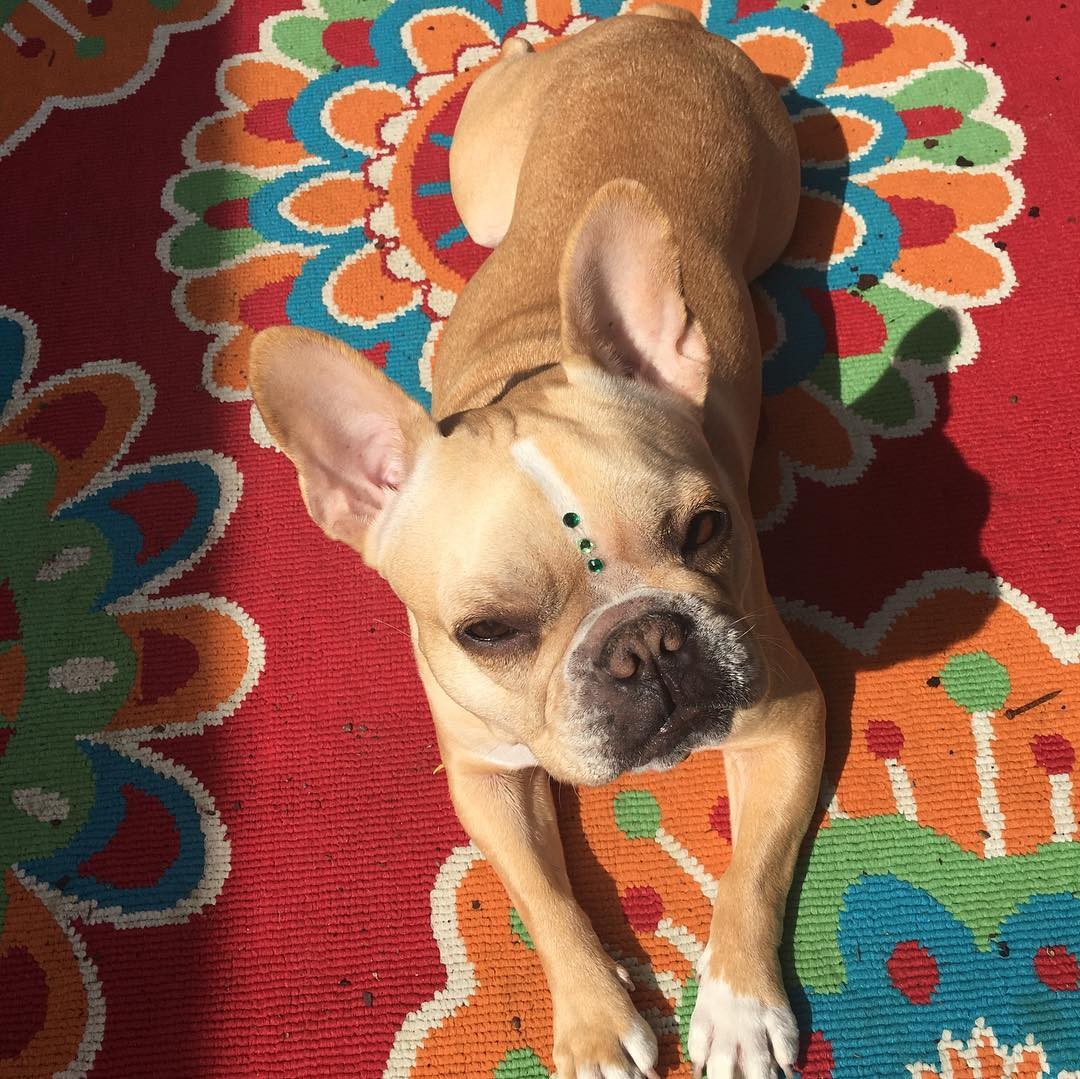 You've just spent a lovely afternoon running around the yard with Fido, or frolicking with one of your other beloved pets. After a day or two, you notice a mysterious itch forming along your body. At first, you may feel this is nothing more than a slight irritation to something you came in contact with. However, as time progresses, the itch is progressing into a suspicious rash. After scouring the internet, you come across scabies pictures and delve into the signs and symptoms. Could it be your four-legged family member who was the host for the much-dreaded Sarcoptes Scabiei, or more commonly known as scabies, shared it with you?

While it may seem possible for your family pet or other outdoor animals to transmit scabies to humans, the Centers for Disease Control and Prevention (CDC) states otherwise. Because humans and animals are physiologically and biologically unique from one another, it's impossible for an animal to transmit the human itch mite – or scabies – through direct contact. This being noted, there may be a slight possibility of scabies transmission should a person infected with scabies pass on these mites to a pet. Since scabies is able to live for up to 72 hours without a human host, it's theoretically possible for scabies to be transmitted via a pet. However, there are no solid reports or records indicating such transmission has occurred.

If It's Not Scabies, What Is This Itchy Rash?

Many of those who receive a suspicious rash after communing with an animal may find it hard to believe they didn't receive scabies from an animal. While animals are unable to be hosts for human itch mites, they can become infected with another type of scabies mite. These animal-only mites are known as mange. While the mites responsible for mange are unable to survive and reproduce within a human host, contact with such mites can result in an itchy skin rash.

As you come in contact with an animal with mange, it's possible these mites can be transmitted into your skin. Although these mites will eventually die, they may successfully burrow into your skin. The survival rate for animal mites within a human host is only a couple of days; however, during this duration, the mites can result in skin rash and irritation that appears quite similar to scabies symptoms. Even though the animal mites die off in a couple of days, if the animals go untreated for mange, it's possible to become reinfected. Therefore, it may seem as if you're infected by scabies when in reality you're simply introduced to animal mites on a revolving basis.

The only way to prevent becoming a temporary host for animal mites is to eliminate mange from your pets. While the exact treatment plan may vary based on veterinary recommendations, there are several universal techniques for mange control and treatment.

The most important step in treating mange in pets is to isolate the animal from other pets and humans. Consider placing the animal in a large crate or blocking off its exit from a particular room. There are several topical, oral, and injection medicines available to effectively kill the mites responsible for mange. To help provide relief for your pet, anti-inflammatory and pain relief medication is often prescribed. The ASPCA states most pets experience a full recovery after one month of treatment. However, factors such as age and health directly influence the speed and efficiency of mange treatment.

Preventative Steps to Ward Off Mange

The most important step in preventing animal mites in your pets is to support their natural immune system. Research has shown pets who are healthy due to a clean environment and good diet feature a significant reduction in mange infestations. If your pet has been diagnosed with mange, it's imperative to immediately wash all bedding and collars in hot water and dried via hot air. Much like human itch mites, the mites responsible for mange cannot survive without a host.

If your pet is an indoor animal, consider steam cleaning all carpets and furniture in your home. Perhaps the most important way to prevent an outbreak of mange within your pet is to take Fido for regular vet checkups. This is essential if your pet has been previously diagnosed and treated for mange. The vet will look for skin scrapes, which indicate whether the mites have been fully eliminated.

Naturasil has the perfect all-natural Mange Treatment for all animals aged 3 months and up. It's super easy to use. And all our products are backed by a 33-day money-back guarantee.

These Are Real Customer Reviews 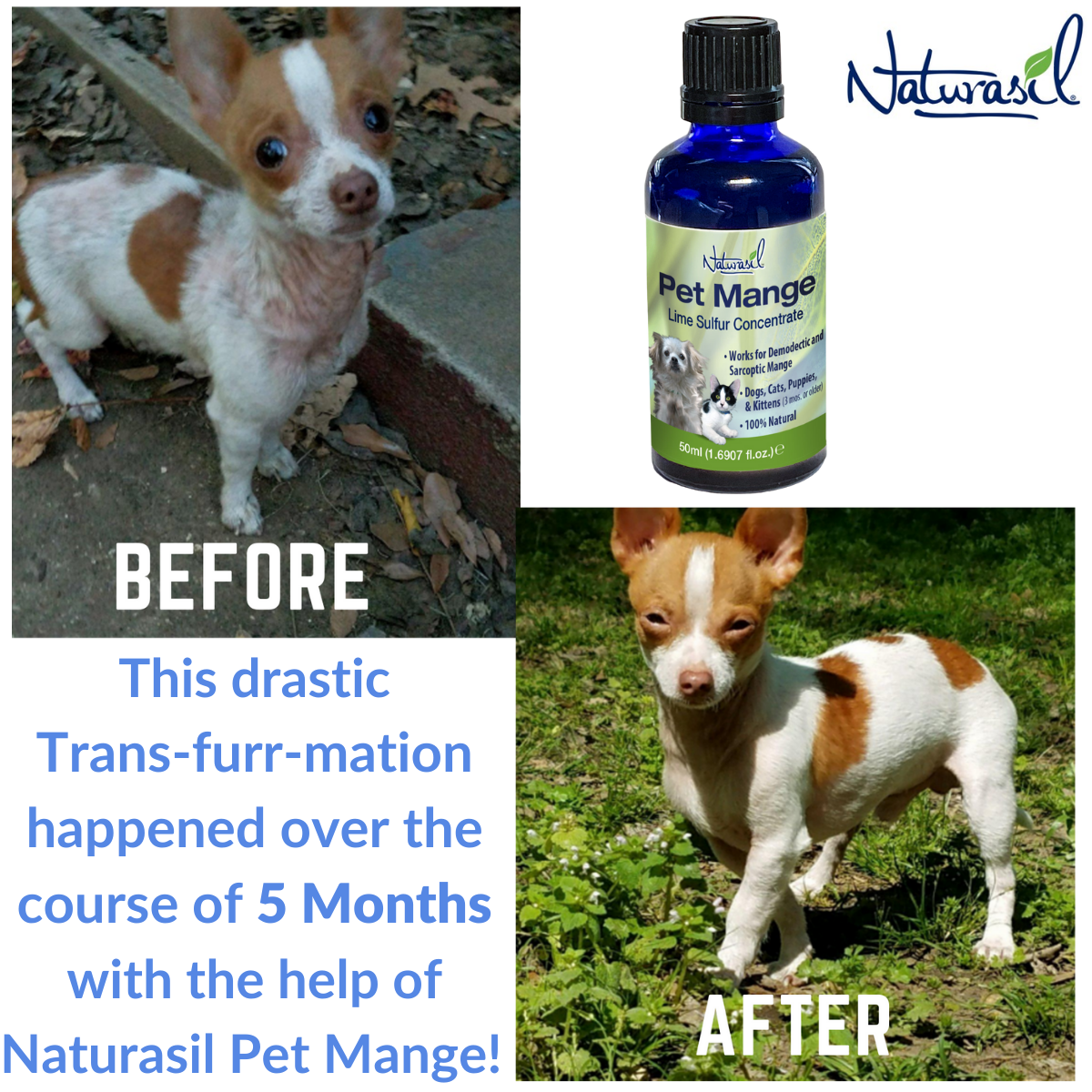 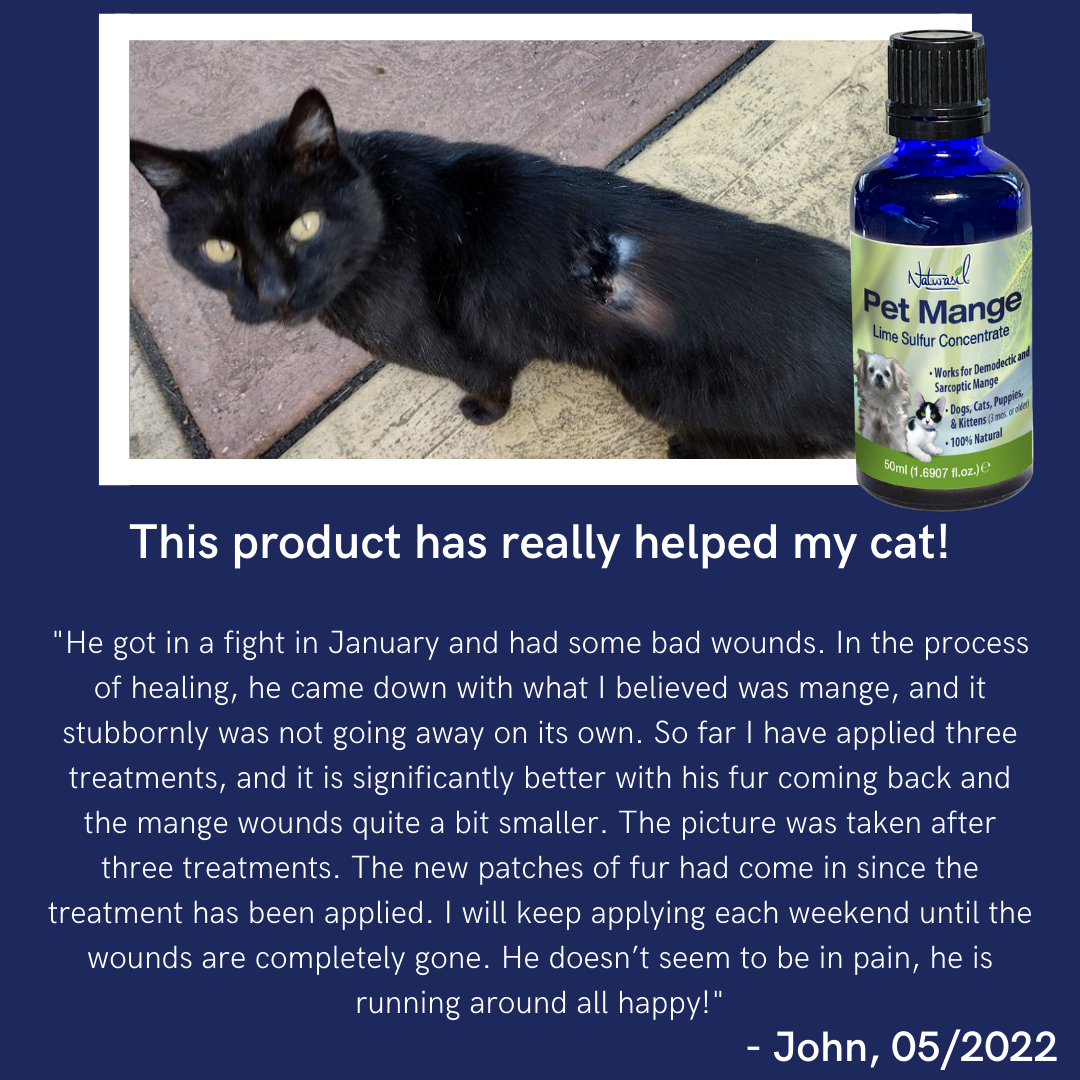 Do NOT apply directly to fur without mixing with water or shampoo.

Installments and Free Shipping on all qualified orders over $50

An easy new way to purchase what you need now!

Do NOT apply directly to fur without mixing with water or shampoo. 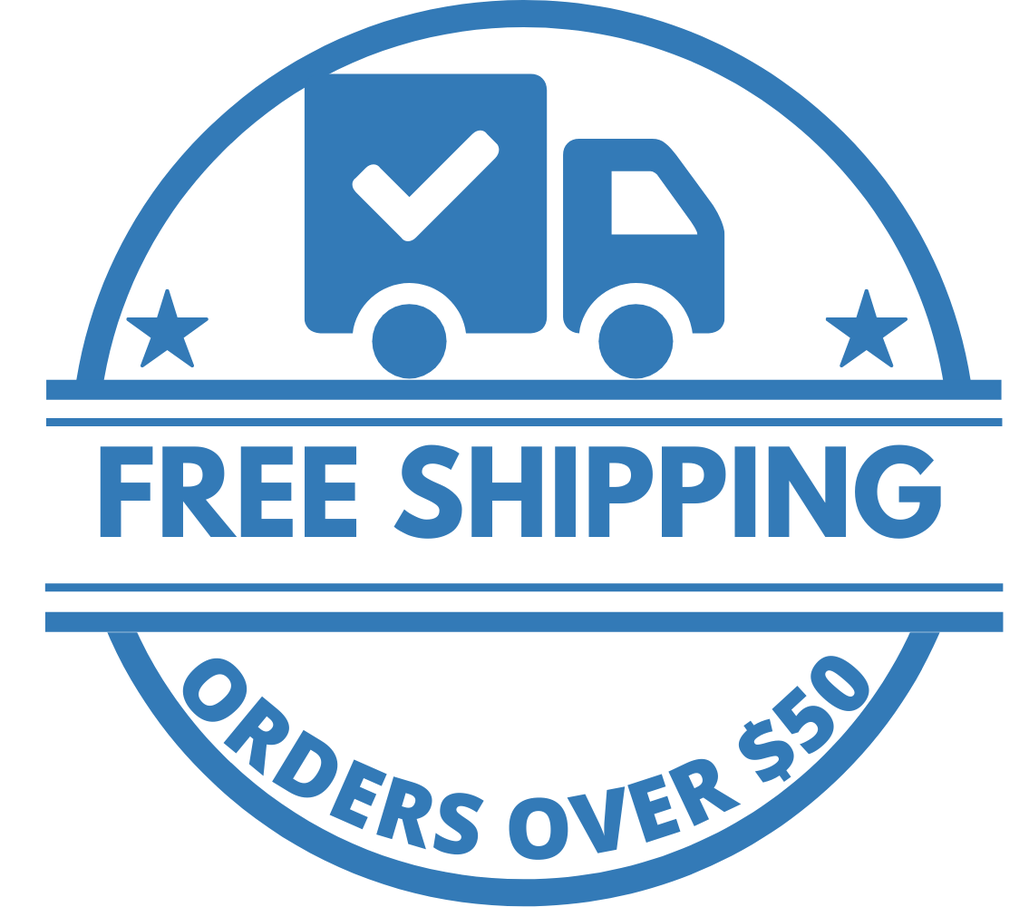 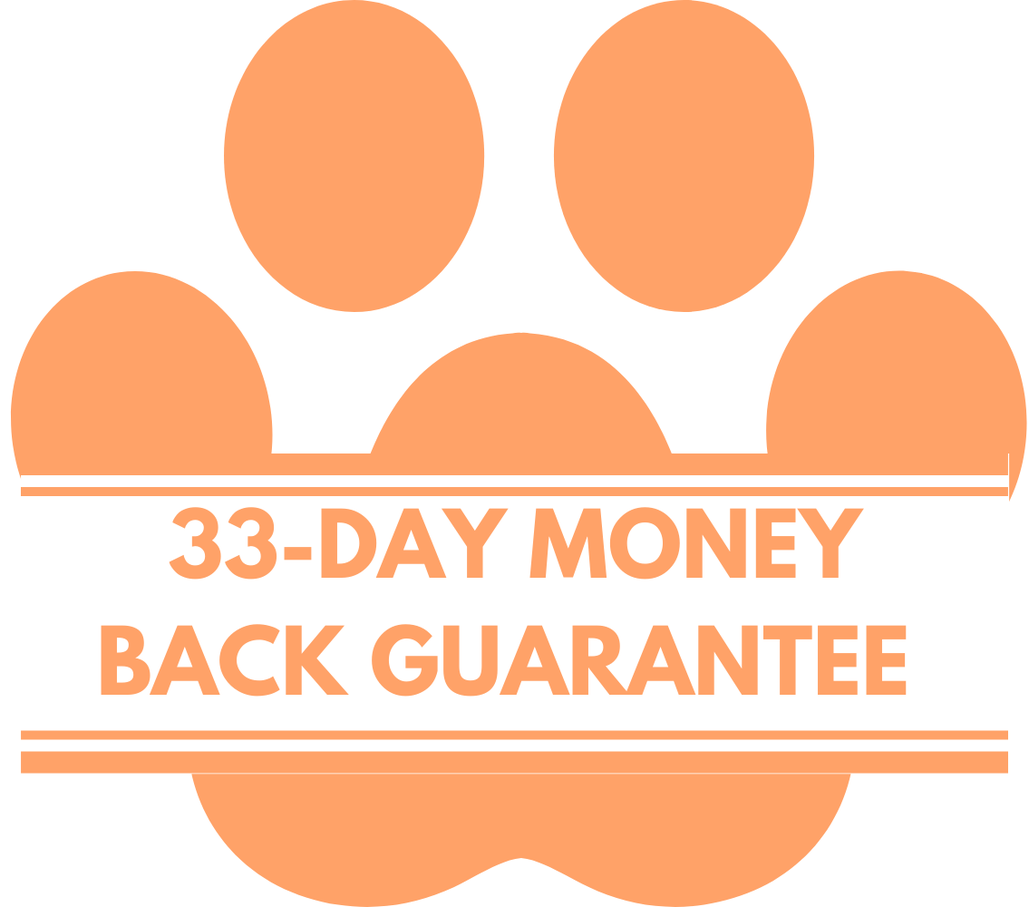 We proudly stand behind the products that we make and if you are not completely satisfied with your results, send the product back with our Customer Care Guarantee. 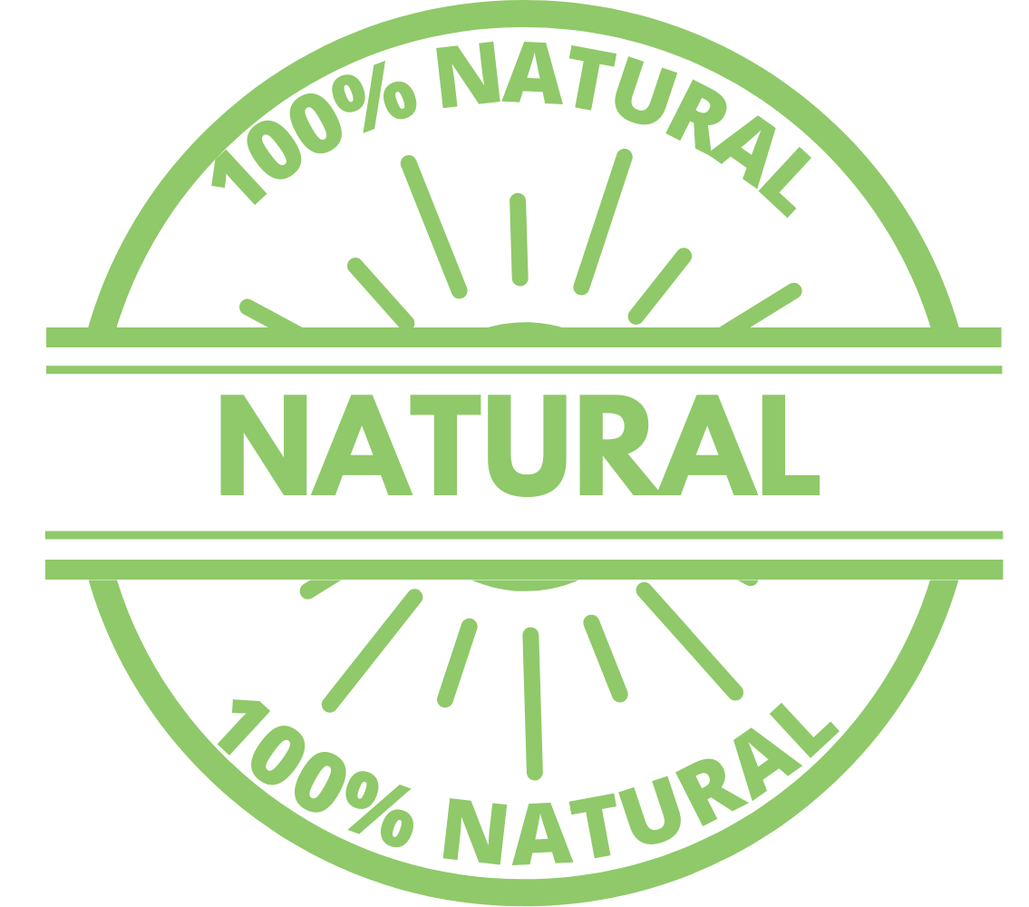 Only Ever The Best

Years of Research and Dedication to All Natural Products have brought together this Perfect Solution.