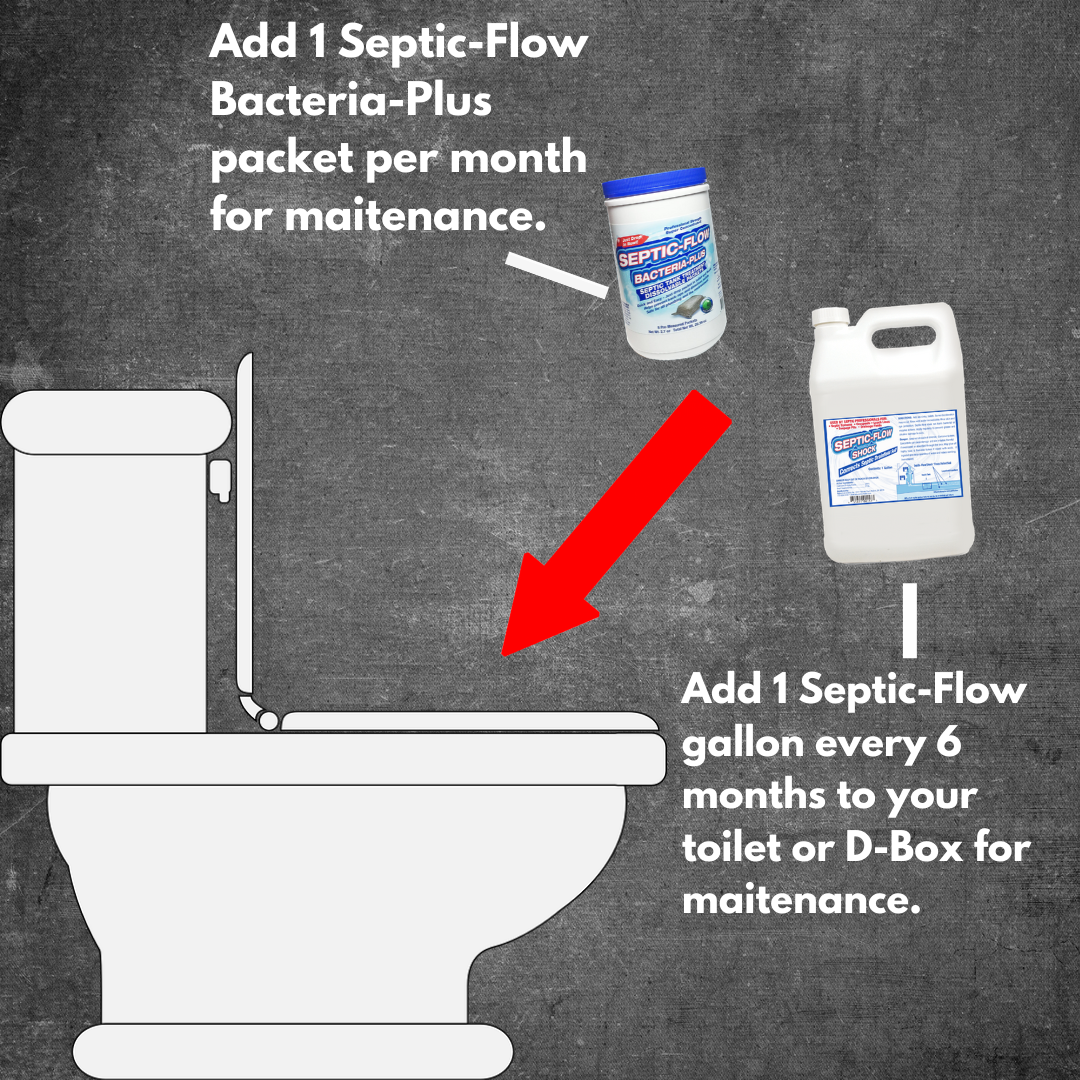 Septic systems treat and disperse relatively small volumes of wastewater from individual and small numbers of homes and commercial buildings. Septic system regulation is usually a state and local responsibility. The EPA provides information to homeowners and assistance to state and local governments to improve the management of septic tanks to prevent failures that could harm human health and water quality.

What does it take to maintain my septic system after a septic incident?

"This is a follow-up review. After having a slow drainage trench for over 20 years I found Septic Flow. Our 35-inch deep access riser would fill with 8 - 18 inches of effluent every day and by the next morning, it would be back down only to fill again. Our tank guy kept telling us we needed a new drainage system at a cost of about 10 grand. I found this product and applied it using two gallons the first week directly to the outlet line after my serviceman jetted it. Then another gallon about two weeks later (it took that long for the 1000 gallon tank to refill after being pumped). Then another gallon the week after that. After three months the riser is completely dry. A condition we have not seen in over 20 years. Buy this stuff because it works!"--D. Malsbury

This is an 8-month maintenance package that combines:

👉Essential treatment to keep your septic system running healthy so that you DO NOT repeat having another septic incident.

"This is a follow-up review. After having a slow drainage trench for over 20 years I found Septic Flow. Our 35-inch deep access riser would fill with 8 - 18 inches of effluent every day and by the next morning, it would be back down only to fill again. Our tank guy kept telling us we needed a new drainage system at a cost of about 10 grand. I found this product and applied it using two gallons the first week directly to the outlet line after my serviceman jetted it. Then another gallon about two weeks later (it took that long for the 1000 gallon tank to refill after being pumped). Then another gallon the week after that. After three months the riser is completely dry. A condition we have not seen in over 20 years. Buy this stuff because it works!"--D. Malsbury

This is an 8-month maintenance package that combines:

👉Essential treatment to keep your septic system running healthy so that you DO NOT repeat having another septic incident.

"The best saved me thousands!"

Septic-Flow is not a new science. It is a tried and true method to get your septic field flowing again.

In simple terms, it is a chemical product first used in the 1950s to help soften or loosen the soil surrounding your septic system to get it flowing again.

It is a septic tank maintenance aid that helps reverse "deadpan" or "hard soil" that has formed after years of sodium building up in the soil from the use of washing machine and laundry detergents as well as body and hand soaps. With thousands of gallons a year pouring into your septic field, this slowly accumulates sodium build-up over time, causing the soil to harden and not accept any more water or bio-nutrients from your septic system into the soil. Once the soil locks up, there is little left to do but dig up the entire drain-field system and install a costly new one.

Now you have a simple and inexpensive solution to digging up your entire septic system caused by locked-up soil. 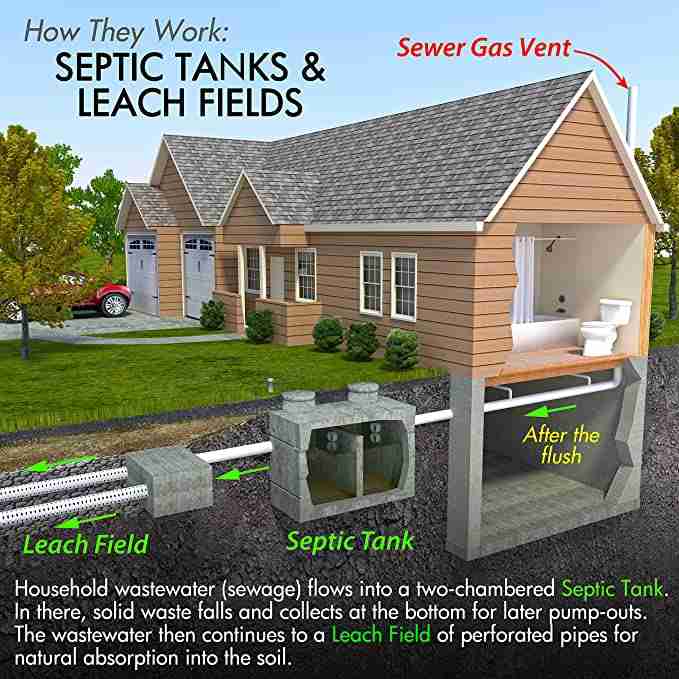 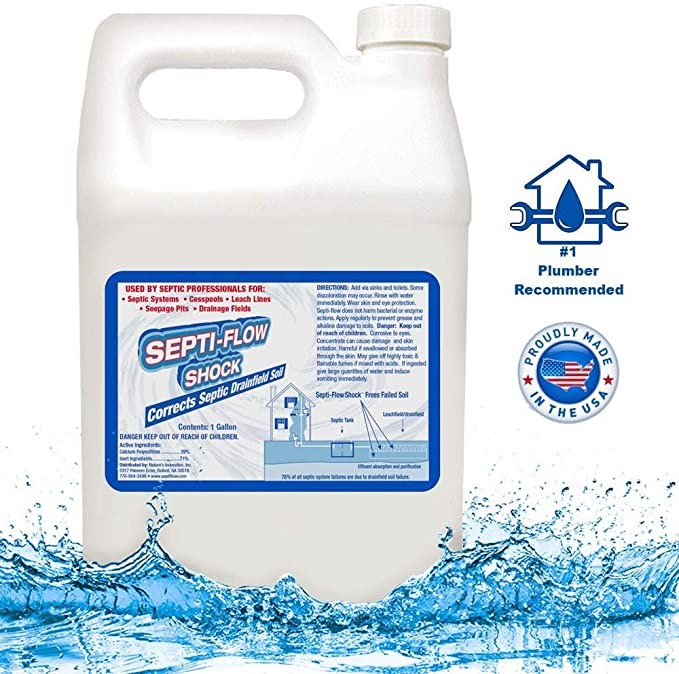 A modern upgrade on a classic solution.

Septi-Flow Shock™ was researched and developed in 2004 based on previous technology and patents from the 1950s; originally invented by Ortho Chemical Company. Ortho stopped making the septic treatment products in the 1970s to focus on a  more lucrative agricultural chemicals business and Nature's Innovation, Inc. has picked up and improved the chemical and manufacturing process to produce our septic treatment products.

Shock Treatment: Use 2-3 gallons on the drain field and 1-2 gallons in d-box or applied via the drain.

One Gallon Every 6 Months for Maintenance. 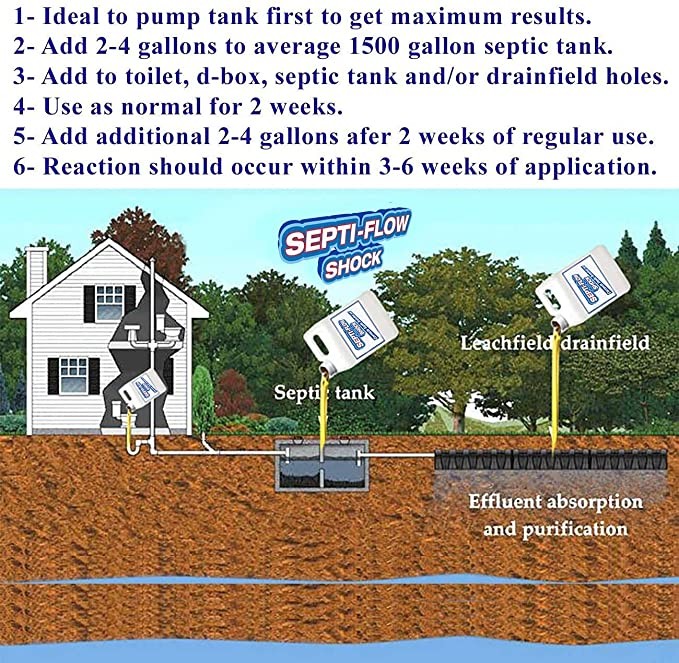